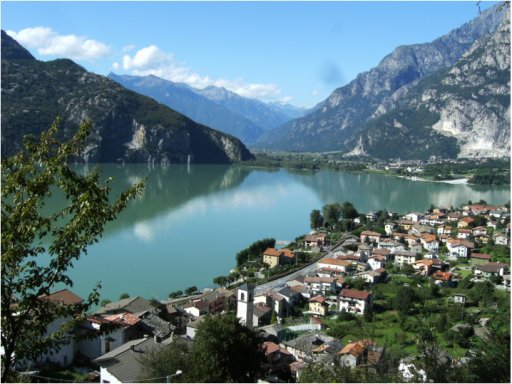 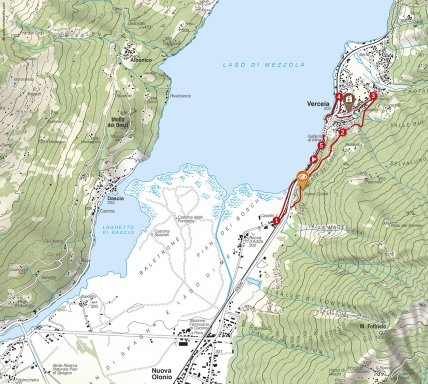 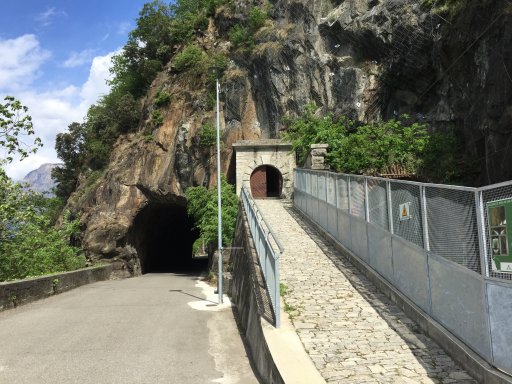 The “Strada dei Cavalli” (horse track), until 1834, was the only muletrack which connected by land the Valchiavenna to Lake Como. The name of the route comes from the pack horses that frequently used this route directly towards the north. The route offers wonderful views to admire the Pian di Spagna oasis and the Valchiavenna. The final part on the old unused state road which goes along the side of the Mezzola lake is also very attractive.

To get to the starting point you need to go by car along the SS36 towards Chiavenna; before the Verceia tunnel go left onto the old road, go about 400 m and you arrive at the carpark under the mountain.
Leave the car, go back down the road to the start of the Verceia Tunnel; just before the road joins the SS36, there is a underpass which leads you to the cycle/walk track that arrives at Casello 7, passing between the railway and the side of the Mezzola lake.
When you get to the level crossing (1), cross with care the SS36 main road, go around to the left where, signposted by a totem, the Horse track starts, it goes immediately up the side of the mountain. After about 100mts you get to the remains of the house of the “Nona Pepa” (find out about this lady by reading her story on the sign attached to the wall).
Just underneath, level with the road, there is the Dolzino fountain, Monument dedicated to the Chiavenna patriot who in 1848 blocked the Austrian troops by pretending to have a cannon (in realty it was a tree trunk disguised).
Wade across a stream and passing the stone protection nets for the state road underneath, we get to Sasso Corbé, a panoramic point over the Pian di Spagna with an info board.
A narrow passage between the rocks and a steep staircase brings you to the point where in 1613 Vespasiano Salis lost his life, (he was the mayor of Morbegno) and his servant, who fell of a horse falling down into the lake underneath. (Don’t worry because now the path is secure due to parapets, protection and handrails).
Once past Sasso Corbé the mountain is now less overwhelming; in the area Acquabona there are the remains of watering place, just a little ahead you arrive at a junction: the left hand footpath goes down hill rapidly to arrive at the ex main road, while the right hand footpath arrives after a couple of streams at the hamlet of Villa.
The footpath intersects the road (2) and carries on left passing vegetable patches, fruit trees and fields. A short descent down stairs leads you to cross the Vallaccia stream; at the junction turn right passing by the side of the “fontanin”, a source of water that does down to the fountain in the Corti village. After you have gone past the stream barrier, the horse track ends going onto the track in the Corti village (3).
At this point you go left into via Corte passing between the old houses (one of these has a religious fresco dating back to 1625); At the crossroads go left on the road that goes in front of the cemetery to arrive at the S. Fedele churchyard, dedicated to the saint who was martyred on the other side of the Mezzola lake.
Go right onto the asphalted road until arriving at the underpass (4) that comes out on the side of the lake. At the left hand stop sign, go along the lakeside returning along the ex main road that goes away from Verceia. The last group of rural houses in via Nazionale precedes a short distance where you come into the tunnel.
Exiting from the tunnel look on the left hand side at the entrance to the Verceia Galleria di Mina - Mine tunnel (5), built by the Italian army during the First World War, built with a main corridor split into the 4 sections with 18 branches, 16 mine shafts, a withdrawal shaft, 6 rooms, 4 cisterns and 3 ventilation ducts.
The tunnel should have served to cut the road and train connections of the Valchiavenna, via a controlled explosion of a substantial amount of explosives placed in various points of the tunnel on the possibility of an attack by enemy forces coming from the nearby Switzerland (info: +39 0341 940322). After you have passed the level crossing you arrive shortly at the carpark, completing the ring.