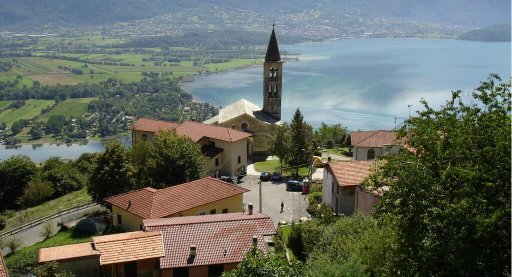 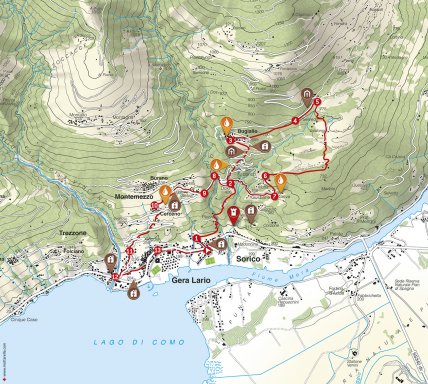 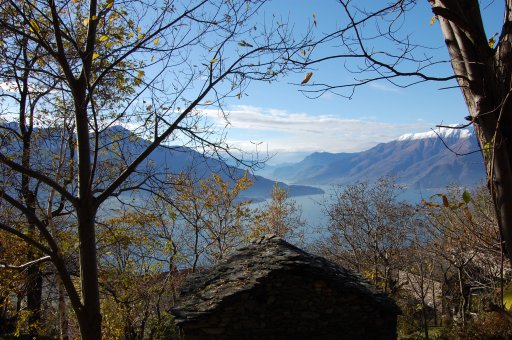 This route goes along the ancient mule tracks in the woods of the ancient Pieve of Sorico - it connects Sorico with Bugiallo, Montemezzo and Gera Lario. the route has many panoramic views over the first part of Lake Como and the Pian di Spagna; passing the abandoned hamlets you can also see evidence of the farming culture which developed over the centuries on the side of the mountains of the Alto Lario.

Depart from piazza Cesare Battisti in Sorico, in front of the town Hall. Go towards the exit of the piazza and cross over the main road to visit the parish church of Santo Stefano, built in 1444 with a facing done by the Giulini family in 1703, maintaining the original apses, the portal, part of the perimeter and the large bell tower masonry. Go past the “Piscen” bar and turn right into via Roma (signposted “Dolo / Bugiallo / S. Bartolomeo”); at the junction go right onto the Muletrack of the via Piana (1).
This was the site of the monastery of the order of the Humilated, with the adjoining Romanesque little church of S. Orsola.
The Muletrack climbs up the “Mutt”of San Giorgio to get to Piazzo, preceded by a panoramic hillock, under which starts the Sorico waterfall. Fixed into the wall is an antique “pila”, a carved stone which they used to grind grains.
The road flattens out and you come to a iron and wood bridge which goes over the torrent; go right in the woods and at the crossroads in front of a ruin go left to go to Dolo (2). At the crossroads near the fountain go straight on (signposted “Bugiallo / S. Bartolomeo”). The path crosses the road to S. Bartolomeo several times, you cross the Fabbrico village and brings you out at the fifth century S. Giovanni Battista church at Bugiallo. The cobbled road stops in piazza S. Giovanni (signposted “S. Bartolomeo / Peledo / Via dei Monti Lariani”), after which go right passing between the houses and at the cross roads in front of the S. Gaetano Oratorio (3) go right (signposted “Peledo / Via dei Monti Lariani”) on the footpath that goes away from the last houses in Bugiallo and into the chestnut wood and comes out onto the asphalted road (4). Go uphill a bit more and you arrive at Peledo, where you leave the asphalted road to go right onto a rough track (signposted “chiesa di S. Miro / Via dei Monti Lariani); go for a few meters to go right downhill taking (5) the via dei Monti Lariani (signposted “Chiesa di S. Miro / Via dei Monti Lariani”). The walk passes by the side of a rockface, it goes back onto the rough track, go round to the left between the beech trees and you come to the mountain houses at Valdongo. Continue downhill and pass by the side of a fence (6), and go down on a footpath that brings you quickly down to the houses at Selve (7).
We leave the Via dei Monti Lariani, turning right on the asphalted road (signposted “Dolo / Montemezzo / Gera Lario”); passing Gusbano you come back to Dolo, at the crossroads at the fountain (2). Continue straight on the asphalt road (signposted “Montemezzo / Gera Lario”) and come onto the Montemezzo road.
The route now downhill, goes over the Sorico torrent (8) (note the scary drop to the left hand side of the bridge) which arrives at Selva (9). At the bend go right uphill, you arrive quickly at San Martino church (century XV-XVI), a holy building situated on a terrace which overlooks the first part of the lake, Il Pian di Spagna and the mouth of the Adda and Mera rivers.
The inside is richly frescoed: the presbytery is decorated with a crucifixion, work by the school of Aurelio Luini, while on the triumphal arch there is a representative of the universal judgement. In the lateral chapel, gift of the emigrants of Palermo and Ancona, frescos by Fiammenghino.
By the side of the church (signposted “Gera Lario”) the road starts which, passing by the cemetery, goes onto the Muletrack that connects Gera Lario to the mountains of Montemezzo, pass through the narrow alleys of Cerceno (10) crossing the road several times. The footpath stops when you arrive at the first houses of Gera Lario (11) : continue on the right on the asphalt road and go past the Corpo Forestale, then turn left onto the via Antica Regina (12).
The road passes by the side of the Santuary of our Lady of Fatima and finishes in piazza Barilani, where many houses are decorated with religous frescoes in sacred images. At the end of the piazza you must cross the main road (13) and follow the footpath towards Sorico.
Along the via Vittorio Emanuele, which brings you back to the starting point, you can note on the left hand side towards the mountain the ruins of the seventeenth century villa Giulina, a splendid palace which was the residence of the last members of the Giulini family; then on the right hand side there is the ex oratory of the Immacolate conception, also called the “round church”, today now converted into a house.