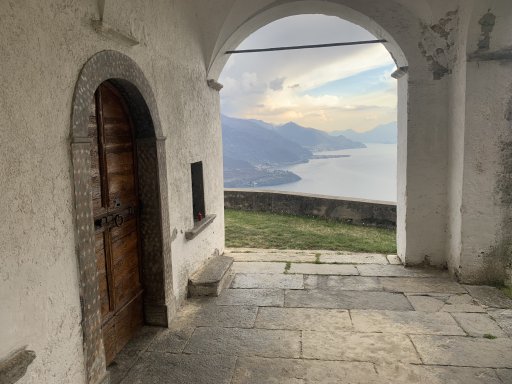 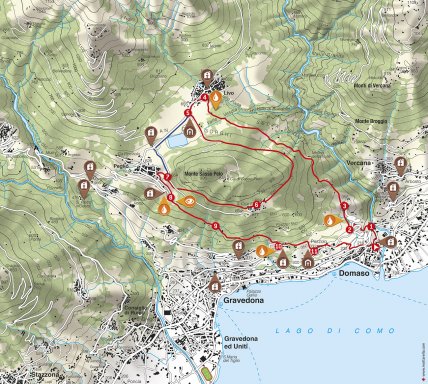 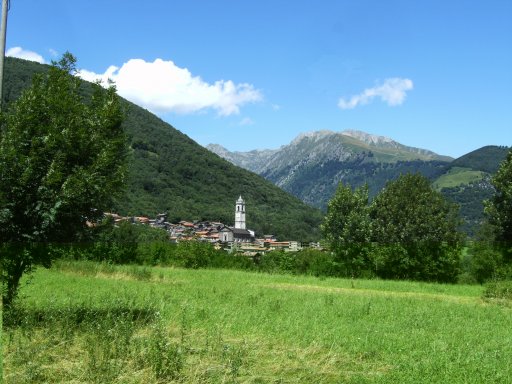 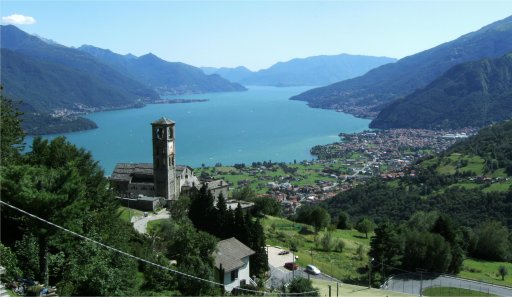 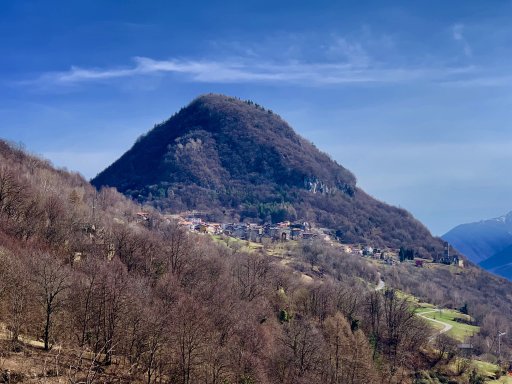 The monte Sasso Pelo towers over Domaso and Gravedona ed Uniti; on the slopes there are many villages which lived for centuries by agriculture showing their history and artistic past. Easy multipacks in the woods and great views over the lake make this walk particularly enjoyable.

The walk starts at the front of the S. Bartolomeo church at Domaso. Go down the left hand side of the church along the asphalt road for Gaggio / Pozzolo and at the junction, just past the sports centre turn right.
Just before the Bridge over the Livo river (1) go left up a steep Muletrack (signposted “Gaggio / Livo”) that comes out on an asphalted road, go right onto the road and then at the cross roads right again in direction “Gaggio”.
After about 80 m. go left (2), joining the Muletrack again at steps which leads to Gaggio: entering into the village center on a wide cobbled track and then at the cross roads after the locanda (3), continue to the left on the Muletrack.
At the next cross roads go right (signposted “Livo”); the track goes up hill and reaches after about 2 km of easy walking, the village of Livo, come out onto the asphalt road (4): go left along via Mazzini and exit from the village always on the left on the SP 4.
You arrive at a small chapel (5) and from here you can choose between two alternative roads: the first one takes more time, about 3 km passing between the rocks of Sasso Pelo, the second goes straight to Peglio. If you choose the first alternative, at the small carpark go left along the rough track (signposted “Naro / Peglio / Gravedona”) that goes up the north side of the mountain, at the stream go left on the footpath (signposted “Naro / Peglio / Gravedona”) that brings you toward the Sasso Pelo lake.
On the walk you can see the remains of a “calchera”, a oven that produced lime for building use: just shortly afterwards there is the first signs of limestone: proceed with caution down this descent, until you arrive at the clearing when the footpath stops coming onto a rough track.
Continue to the right (signposted “Naro / Peglio / Gravedona”) to come into the village of Naro, (6) lovely hamlet of Gravedona. at the cross roads go right (signposted “chiesa di S. Croce / Peglio”) and you come to the little S. Croce church, built at the start of the XVI century, rich with frescos, done mainly by Andrea and Sigismondo De Magistris in 1529.
The walk goes to the right of the church on the footpath which comes after approx 700 m onto the asphalted road; continue right (signposted “Peglio / Gravedona”) to come to the first buildings in Peglio in via Calchera.
If you choose the second alternative, it is much quicker and easy, from the little chapel go staight on the asphalt road, going through the Piano dei Gorghi to arrive at the baroque church of the Beata Vergine of Gorghiglio; from here go left, keeping on the asphalt road, to join up with the longer route.
When you get level with house No. 5 (7) go around to the left (right if you chose the shorter route) on the cement footpath, at the cross roads left again, past piazza Narido and go along, still on the left, via Del Pero, arriving quickly at the SS. Eusebio e Vittore church, richly decorated by frescos from the XVI to XVII century with the money from the people from Peglio who emigrated to Palermo. The wonderful interior is in a baroque style enriched by works by Fiammenghino and Alessandro Valdani.
At the corner of the cemetery (8) take the footpath (signposted “Gravedona / Domaso”) which goes down towards Domaso; just under the church you can see the ancient iron mine. At the crossroads (9) continue down hill on the right (signposted “Segna / Domaso”) and you arrive at Segna (10); proceed on the paved road and then left onto the asphalted road (signposted “Pozzolo / Gaggio / Domaso”) that goes by the side of the oratorio of S. Lorenzo.
Leaving behind the last houses, there is a short part which is rough track then go right onto the footpath (signposted “Pozzolo / Domaso”) which goes downhill quickly between the fields and the vineyards bringing you out, after a narrow track to Pozzolo, a small hamlet of Domaso.
At the junction after the first houses go right, where you can get to the small church dedicated to the Madonna delle Grazie, with a wonderful view over the lake. The route passes between the houses on the narrow lane until you arrive at the asphalted road, go though Piazzetta Acone along the road and you arrive at Villa Garovet, where there is a important local wine producer.
Leave the road (11) to go right onto the Muletrack; at the junction go right (signposted “Chiesa / Centro Storico”) and when you arrive at the stone path, go to the right then immediately left into via Valsecchi to get back to the S. Bartolomeo church.