The tour round eight churches

The tour round eight churches 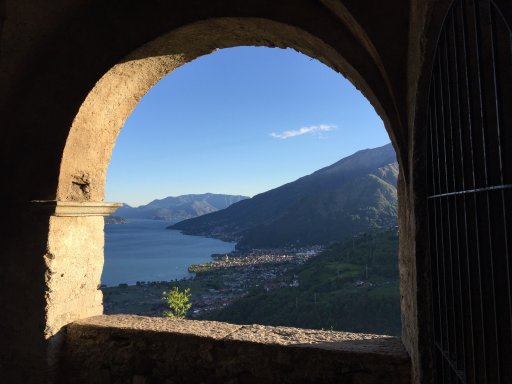 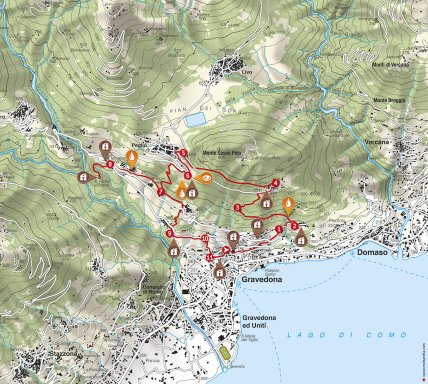 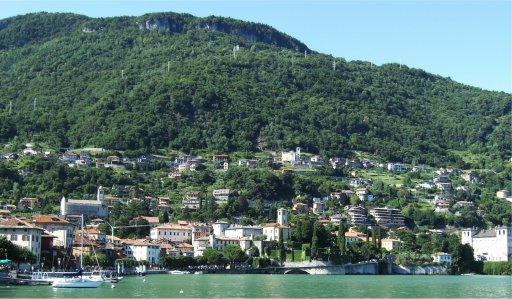 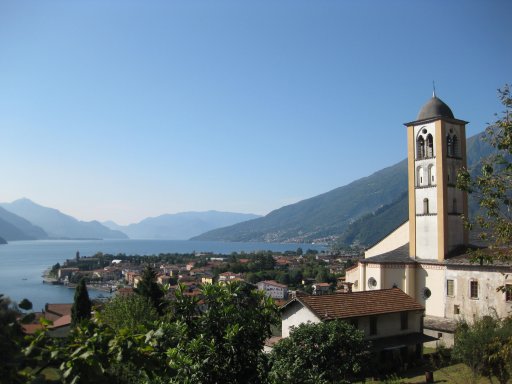 The side of the lake above Gravedona ed Uniti is noted for the many religious buildings, some are simple and humble while some churches are real works of art. This walk shows you eight quite different churches, all which show the profound devotion of the people of the area to their protector saints.

The tour leaves from in front of the S. Maria delle Grazie church, with the adjoining Agostinian convent at Gravedona ed Uniti.
The building was started in 1467, the church was enriched during the centuries by many precious works of art by the most famous artists of the area between the Renassance and the Baroque periods. On the part facing the lake go downhill slightly on via Convento; at the cross roads take the uphilll via Pessina (signposted “Segna / Naro / Livo”), go under two underpasses and the tube of the eletrical power station and then go right on the asphalted road to the hamlet of Moglio (1). Two bends lead you to Segna; shortly before the S. Lorenzo oratorio go left (2) (signposted “Peglio / Naro / Livo”) on a paved road which becomes a steep Muletrack; go over the tube of the Gravedona power station the walk gets flatter then starts going uphill round several bends through the chestnut woods.
At the cross roads go right (3) (signposted “Naro / Livo”) then after another uphill section, go right again (signposted “Naro / Livo”) on the cement track which arrives at Naro.
At the cross roads go left (4) (signposted “Chiesa di S. Croce / Peglio”) on a flat footpath that brings you to the S. Croce church, built at the start of the XVI century and full of frescos, done mainly by Andrea and Sigismondo De Magistris in 1529. The walk goes to the right of the church on a footpath which joins up after approx. 700 m. with an asphalt road; continue to the right (signposted “Peglio / Gravedona”) and you arrive at the first houses in Peglio in via Calchera.
By house no.5 (5), go left on the cement footpath, at the junction left again, go through piazza Narido and then, keeping to the left, go on the via Del Pero to arrive at the SS. Eusebio e Vittore church. From the parking in front of the church go left on the SP road n°4 (6) (signposted “S. Pietro in Costa / Negrana / Gravedona”) and when you go past house no. 12, go left again on the downhill Muletrack; at the junction go right and then, at the next y junction where there is a stone milestone (7) go right again (signposted “Traversa / S. Pietro in Costa). When you get to the hamlet of Traversa go left on the asphalt road to come to the SP road 4 and the nearby S. Martino church (XV C.).
From the main road you go off to the left on the footpath (8) (signposted “S Pietro in Costa”) that goes off into the woods , arriving at the S. Pietro in Costa church at Dosso del Liro, situated in an isolated position and built between the XV and XVI centuries; in the inside of the church there are frescos on the Apse, dated 1532.
Go back to the SP4 on the same footpath and at the crossroads go left (signposted “Travisa / Peglio”), going back to Traversa.
At the bend leave the asphalt, going straight on the footpath that brings you back to the junction with the stone milestone (7); this time you go right downhill (signposted “Travisa / Negrana / Gravedona”). The footpath gets wider, becoming an asphalted road then , then paved with cement blocks; at the first houses at Travisa go round to the right downhill and then at the stop go across the main SP Road, go straight on taking the cement road that comes out on the bend between the houses at Negrana.
Walk to the left downhill until the SS. Nabore e Felice chuch, built around the end of the XVI century and modernised during the middle of the XVIII century; here go left (9) and go  along via Ai Ronchi. When you get to the house n° 22/24 (10) go right up the cement stairway and when you get past the fountain, you go right to arrive, after a steep downhill section, to the asphalted Via Fontanella.
Go across the SP road and go left onto the cobbled lane (11) which brings you quickly to the small SS. Gusmeo e Matteo church, built on the site of the martyrdom of the two saints and frescoed by Giovanni Mauro della Rovere, known as il Fiammenghino.
Go past the traffic lights and continue on the left to come back to the S Maria delle Grazie church to close the ring.