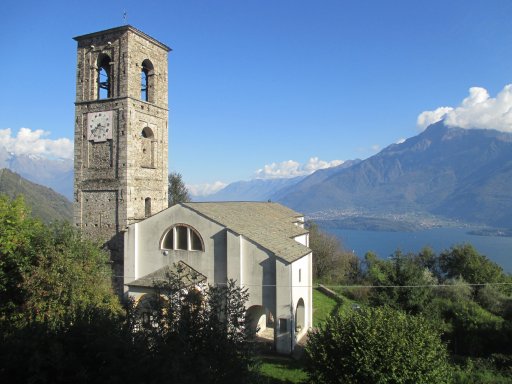 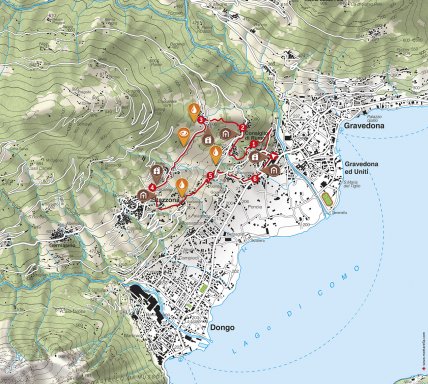 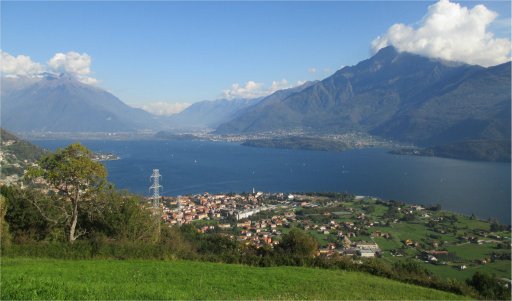 Lovely walk on the first ridge of the Cortafon mountain, with many panoramic views over the Dongo plain, over the Valtellina and on the other side of the lake. It passes by Stazzona and towards Brenzio, where the “Matto di Brenzio” the madman from Brenzio, sheltered in his castle, a bandit who lived during the first half of the XVI century, who together with his son terrorised the villages of the Como area.

Leaving from the S. Gregorio church in Consiglio di Rumo (hamlet of Gravedona ed Uniti), built in the XVI cenutry; in the inside there are many frescos from the XV to XVII century, paintings by Isidoro Bianchi on the triumphal arch and canvas paintings Carlo Pozzo from Valsolda (XVII C.).
Leaving the church behind you you go up a short uphill section and go immediately right along via Guasto (signposted “Alborescia / Brenzio / Stazzona”).
At the second bend (1) go left on the paved road (signposted “Taiana / Alborescia / Brenzio / Stazzona”) that goes through the group of houses of Tassimola; go right onto the Muletrack which is well signposted and brings you first to Taiana and then to Alborescia. When you arrive at the asphalt road you go right, go past a small chapel, a fountain and another small chapel then go left on the cement road (2) (signposted “Brenzio / Stazzona / Dongo”) which comes onto the Muletrack bringing you, after a uphill section between the fields to Brenzio. After a small cemetery you meet the asphalted road.
The route goes straight on, but before it is worth stopping at the nearby real gem of S. Giovanni Battista church, from the fifteenth century where there are diverse pictorial cycles done by Giovanni Mauro della Rovere known as Fiammenghino and Isidoro Bianchi da Campione. When you arrive at the top of the climb the Muletrack comes onto the asphalt road (3); bend round to the left (signposted “Stazzona / Dongo / Gravedona”) and exit from Brenzio, going along the straight panoramic road that arrives at Stazzona, in Via alla Chiesa. At the stop sign go left and you quickly arrive at the S. Giuliano church, built in the XVI century, inside there are many decorations with stucco and frescos from the seventeenth century in the two lateral chapels. The presbytery is decorated with frescos from the eighteenth century by Giulio Quaglio and G.P. Recchi.
By the church there is an building renovated in memory of ancient times a “Masùn”, the typical mountain house in stone and wood with a sloping roof covered with rye straw, used as a stable and barn.
By the lake side of the church the descent in cement starts (4) (signposted “S. Gregorio / Dongo / Gravedona”); at the junction after 30 m you walk to the right on the cobbled footpath, at the junction go straight on the asphalt road then left onto the Muletrack preceded by some cement steps. When you get to the asphalt road you go left, you go past the small chapel bending round to the right and you continue straight on the Muletrack that comes onto the asphalt road again. Departing from the last houses the walk goes straight on up a cement stairs and on the downhill Muletrack that brings you to Vanzonico. When you get to the asphalt road go left, go past a fountain and at the bend go left again on the Muletrack (signposted “Ganda / S.Gregorio / Gravedona”).
In this area there are many “crotti”, natural cellars transformed into taverns, in which the constant temperature helps conserve wine, cheese and salami.
Arriving at Ganda the route meets a bend on the asphalt road (5); you go left uphill (signposted “Giussanico / Gorgotto / S. Gregorio / Gravedona) then right on the cement road (signposted “Giussanico etc..”) then, after some bends, meet the asphalt road and follow arriving at the hamlet of Giussanico. At the junction in the little piazza between the houses continue left, then straight onto the cement paved road, at the next junction go left downhill and at the end right onto the asphalt road, arriving near the main road SS 340 (6). Continuing straight on Via Regina come onto the cobbled path that goes in front of the cemetery at Consiglio di Rumo; when you get past the small chapel go along the Via Antica Regina and going left at the junction with Via Prestino, you come back to the S. Gregorio church.