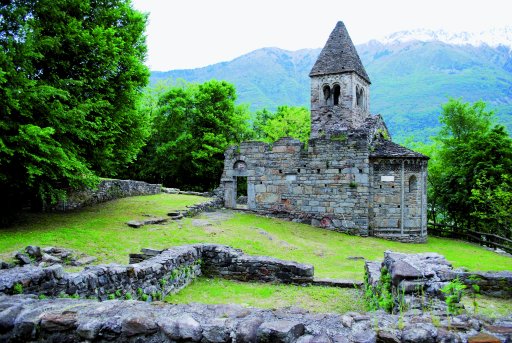 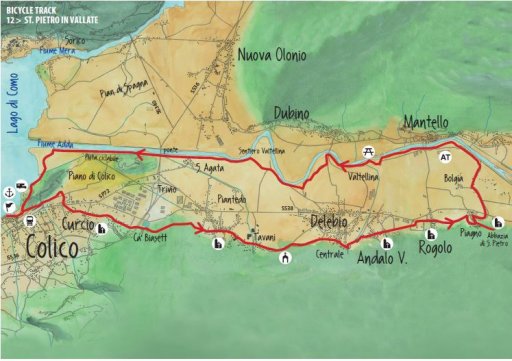 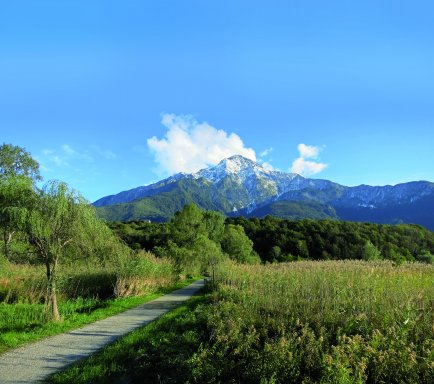 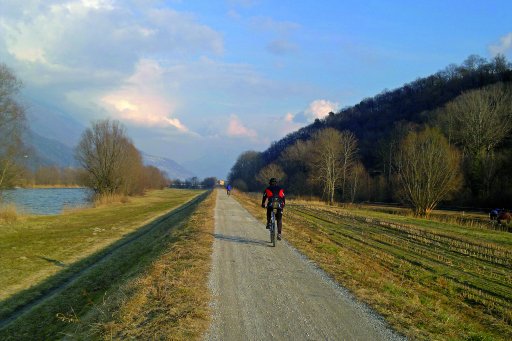 A mostly flat route from Colico up to Cosio Valtellino in the hamlet of Piagno to the Romanesque abbey of San Pietro, founded in the 11th century. The first leg passes through stretches of secondary roads, while returning through open countryside along the Sentiero Valtellina (Valtellina Path) and the bicycle path that leads to the mouth of the river Adda.

Begin from the Port of Colico along Piazza Garibaldi and take Via Montecchio Nord; after the playground turn right into Via alle Torri and the roundabout take the second exit and continue straight on Via Forte di Fuentes. At the fork go left on the overpass (direction Sondrio / Chiavenna); at the roundabout take the second exit on the SP72 and turn immediately left into Via Boscone to reach Curcio. Continue straight on to Via alla Chiesa and then left into Via La Stradeta. At the crossroads go straight in Via Biasett and at the next junction turn left following the sign Sentiero del Viandante (Path of the Wanderer). A challenging climb on dirt followed by a descent that leads to crossroads: turn onto Via Vittorio Emanuele II, passing the cemetery and the church of Piantedo and continue straight until you reach the location Tavani. After passing the chapel of the Alpines, take the first road to the right, continuing right at the two junctions. We are in Delebio: at the crossroads follow Via C. Colombo that leads to the foot of the hydroelectric plant; cross the bridge over the river Lesina, then continue on downhill, keeping to the left (Via Fanfulla da Lodi), then right onto the road parallel to the river. The first right towards the mountain after the cemetery takes you to Andalo; at the next junction turn left into Via Roma, then straight, up to exiting the village. Continue straight along the fence line, following Via Orobie, Via Frege and Via XXV Aprile until reaching the outskirts of Rogolo; at this point turn left into Via delle Rimembranze and, at the stop sign in front of the car wash, turn right. The road crosses Rogolo arriving subsequently in Piagno: from Via Europa turn right into Via Chiesa (sign Abbazia S.Pietro in Vallate) until the stop sign; from here swerve to the right and at the next junction turn left into Via Biella. This last stretch before arriving at the abbey, goes along on a steep cobblestone road; the effort rewarded by an interesting visit to the remains of the religious complex.
To return to Colico retrace the cobblestones downhill until reaching the fountain. At the intersection swerve to the right, then right again in Via IV Novembre; at the fork go left over the bridge and then straight towards the houses of the hamlet Bolgia. At the next junction turn right passing between the houses, then cycle off-road passing under the bridge until reaching the bike path on the left which travels up along the river Adda. After passing the farm ‘La Fiorida’, you pass under the bridge of Mantello; now following the signs Sentiero Valtellina, turning right at crossroads. After about 8 km of flat road through open countryside, you will arrive at the bridge over the River Adda. Take the long straight dirt road leading to the beach of Colico, the track ends in front of the camper area. Continue straight past the creek to Piazza Garibaldi.