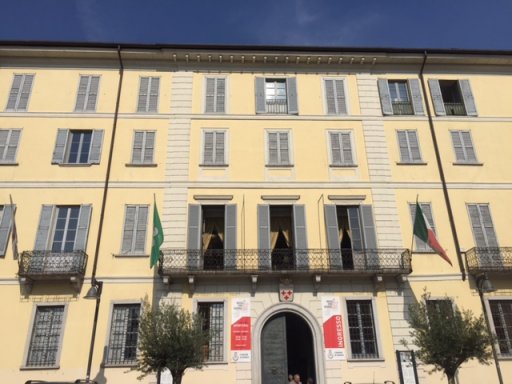 Palazzo Manzi is one of the best examples of the Napoleonic era in Lake Como. It dominates the main square of Dongo and overlooks the old pier. Today the palazzo houses the Town Hall as well as the End of the War Museum, but it was originally built as the home of the noble Polti-Petazzi family in the early nineteenth century. The initial plan was drawn up by Carlo Polti, but the design is traditionally attributed to Pietro Gilardoni, architect and pupil of Pollack. In the meantime, the property passed to the Manzi family, from which it gets its name. In 1937, the last descendent of the Manzi family, Giuseppina, donated the palazzo to the municipality, which made it its headquarters.
During the Second World War, in particular in April 1945, Palazzo Manzi was the backdrop of momentous historic events which the Museum aims to commemorate. It was here that the search operations conducted by the Black Brigades, the paramilitary fascist corps, stationed in Dongo were coordinated. It was also here that the town’s first Liberation Mayor was sworn into office. Following his capture, Benito Mussolini was taken to the rooms on the ground floor for interrogation. Fascist hierarchs captured in Musso were held in the Sala D’Oro (Golden Hall) before their execution (including the ministers Pavolini, Mezzasoma, and Liverani). The Sala D’Oro was also set up as a mortuary for the bodies of the partisans slain by the fascist brigades.
The four-storey building has a U-shaped plan, with a large central balcony on the main floor (today, the first floor) and two smaller side balconies. The austere façade in Neoclassical style has an imposing stone central entrance door with a rounded arch, surmounted by the municipal coat of arms. From the entrance hallway, by climbing a short flight of stairs, you reach the elegant inner courtyard with side porticoes. The municipal offices, Tourist Office and the End of the War Museum are found on the ground floor. A large staircase leads to the upper floor, where you can admire some beautiful rooms, such as the magnificent Sala d’Oro, the old library, which holds more than 4000 books, and the chapel with pictorial decorations of the Immaculate Conception, embellished by the wooden statue of the Immaculate and by the altar in polychrome marble with stucco and gilding decorations by Carlo Vitali di Varenna.

Sala d’Oro (Golden Hall)
Overlooking the large central balcony, the two-level Sala d’Oro was once the hall of honour of the palazzo. It was where the noble owners organised dances and receptions, and is so called because of the sumptuous gilding and golden decorations inside. The room still retains its original shape in “Empire” style and the furniture and fabrics of the time. The right side is dominated by a large marble fireplace decorated with carved telamons and surmounted by an impressive mirror with a gilded frame. The vault and the of the rooms are entirely frescoed with different mythological episodes, created by Giuseppe Ravelli. The centre of the barrel vaulted ceiling features a large fresco of “Parnassus”, the mountain sacred to Apollo and the nine Muses, also attributed to Ravelli.