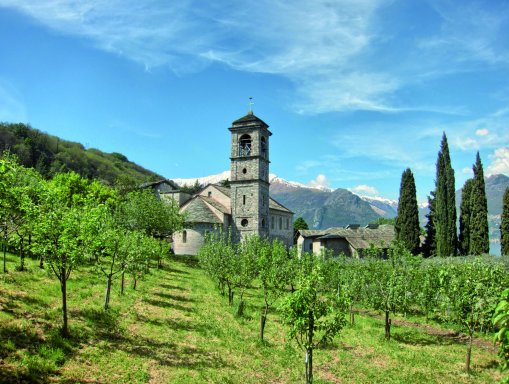 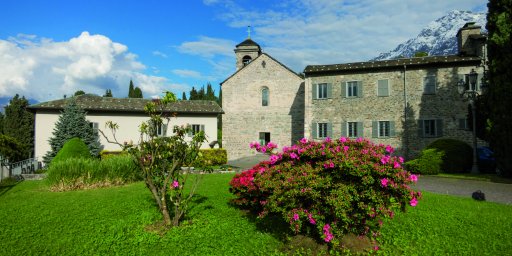 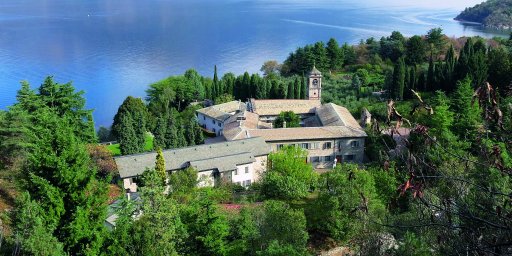 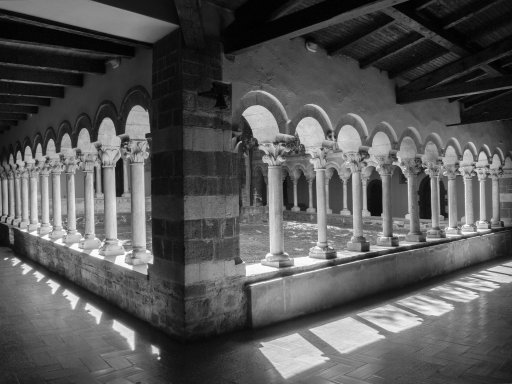 A rare jewel of Lombard Romanesque architecture, the abbey is set at the top of the small peninsula of Olgiasca, immersed in an uncontaminated environment of remarkable beauty. Visitors can walk among the walls and gardens, still cultivated by monks who live in this wonderful place, admiring a breath-taking view of Lake Como, and breathing an atmosphere of peace and tranquillity, perfect to appease restless souls.
The first source attesting to its existence dates back to the seventh century with the existence of a community of hermetic monks, and comes from the “Cippo di Agrippino”, which takes its name from the Bishop of Como who in 617 had an oratory built in honour of the martyr, St Justina. The current building is the result of an extension of a previous church, dedicated first to the Blessed Virgin Mary and then to S. Nicola di Bari.
The church has a single nave ending in an apse with a frescoed vaulted roof. At the centre of the conch there is the “Christ Pantocrator” with evangelical symbols at the four sides. The Apostles in the hieratic Byzantine style are frescoed on the wall below. Not far away are the ruins of the apse of a previous church building, most likely the oratory of St Justina.
The wonderful cloister is found on the south wall of the church, commissioned by the prior Bonaccorso de Canova from Gravedona, as evidenced by the two tombstones of 1252 and 1257. It has an irregular quadrangular shape and is enclosed by round arches supported by columns with different types of beautifully carved capitals. The cloister is the centre of the entire monastic complex, connecting the various parts of the monastery.
During the fourteenth century, however, signs of a slow decline began to emerge due to the decreasing number of monks, which lasted until 1432 with the introduction of the commandery. One of the spearheads of Cluniac evangelisation in the MiddIe Ages, the monastery later fell into a state of neglect and misery until it was finally suppressed in 1798. The monastic complex belonged to many families since the early nineteenth century, and ended up in the hands of the Rocca family. In 1938, Commendatore Pietro Rocca donated the entire estate of Piona to the Benedictine Cistercian Congregation of Casamari as a gesture of purification and forgiveness following the loss of his brother and sister-in-law who died in the massacre of the Gondrand shipyard in Ethiopia.
Still inhabited by monks, today it can be visited according to the religious commitments of the monks. They live according to the Benedictine “ora et labora” (pray and work) rule, producing artisan products for the community, such as liqueurs and herbal teas made using aromatic herbs, which can be purchased locally.