Along the Via Regina

Along the Via Regina 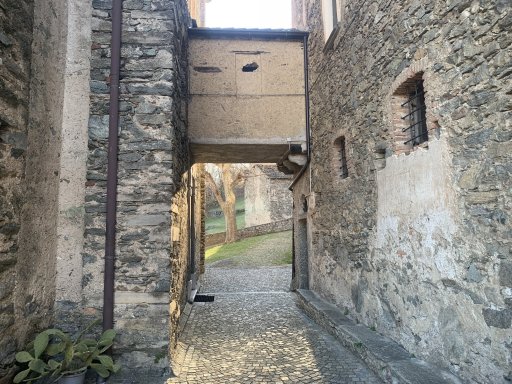 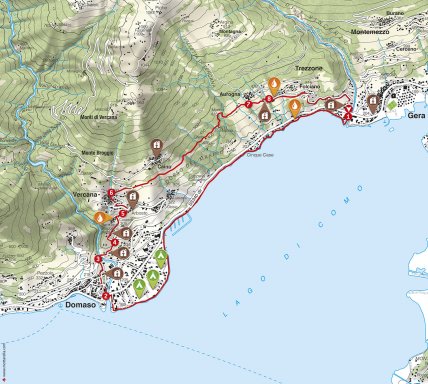 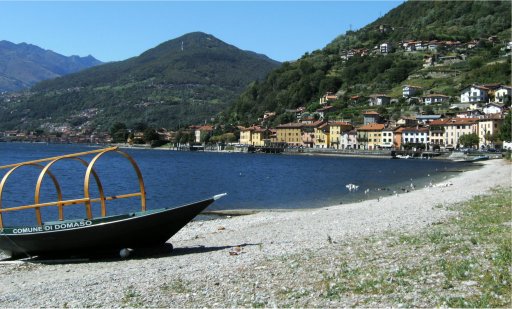 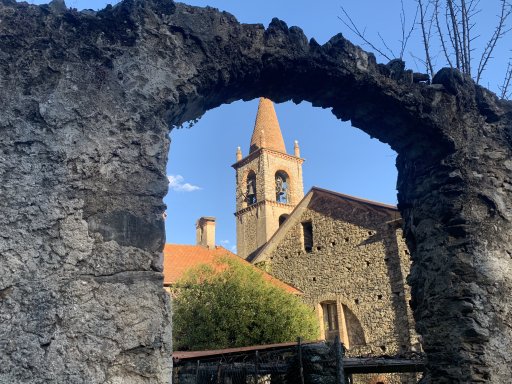 Excursion along some of the Via Regina road from Gera Lario to Domaso, passing Vercana and Trezzone, with lovely views and visiting some interesting churches and villages which dee unchanged over time.

The departure point of this walk is at the S. Vincenzo church at Gera Lario, built in the XII C on a pre existing roman building, renovated in the XV century and have some wonderful decorations.
Just under the church you cross over the main road SS340 (1) and walk downhill along via S. Vincenzo, arriving at the walk and cycle track along the lake side. Continue right along the track for approx 4 km, going past the port and the camping sites of Domaso, until the mouth of the Livo river, then you go right on the asphalt on via Case Sparse. Cross over the SS340 (2), go over the bridge over the river and then go right up the footpath between the river and the wall of the seventeenth century Villa Camilla, the town hall, to arrive at the monumental Domaso church, dedicated to S. Bartolomeo.
The church was built in 200 in a romanique form, but totally transformed in the late Baroque and 700’s, resulting in todays building . Inside there are numerous works of art, amongst which are the seventh century frescos by Ligari.
Follow the asphalt road by the left hand side of the church which leads to Gaggio/Pozzolo and at the junction after the sports centre turn right, go over the lovely stone bridge (3) over the Livo river (signposted “Madonna della Neve / Vercana”). Immediate after the bridge on the left hand the muletrack starts going uphill which leads to the Oratorio of San Silvestro (4); go left here (signpost “Vercana”), and go uphill until you come onto the village road 3 and up the track passing by the side of the Santuary of the Madonna della Neve (our Lady of the snow), built in memory of the deaths caused by the black death which was brought by the Lanzichenecchi who are mentioned by Manzoni 1634. A narrow alley between the rock and the church and an uphill section with a lovely view brings you to Cassera, hamlet of Vercana; that comes out on the asphalt road, go downhill and then after 30 meters go up the steps on the left hand side, go over a bridge and then you arrive at Arbosto, in front of the S. Salvatore baroque church, richly decorated inside with stucco, paintings and wooden works of art (5).
From the church square go onto the left uphill via Provinciale, past the town hall and the bank and take the cobbled track on the right which goes between the houses. Go along the via Vico (signposted “Caino / Trezzone / Gera Lario”), go right then left onto via Piazzo to arrive at the bend of the SP3 (6). Go up the Muletrack up the steps on the left, (signposted “Caino / Trezzone / Gera Lario”) which arrives on the asphalted road, go right downhill and at the bend just underneath go left onto via Masino (signposted “Trezzone / Gera Lario”), on the route which goes through the woods. When you have passed through the Vercana valley go left (signposted “Trezzone / Gera Lario) and go though the village of Aurogna, part of Trezzone which has maintained its antique structure with very high houses in stone with rooms over the streets, frescos on the walls and narrow cobbled alleys. Follow the white and red flags, go out of the village on the downhill footpath, then go left onto the Muletrack (7) (signposted “Gera Lario / Domaso”), pass a small saints chapel and two stone signposts, go downhill to the Madonna delle Grazie church, fifthteenth century church with a baroque interior, built in an isolated position half way between the two parts of Trezzone.
A downhill stairway after the church entrance comes out onto the SP 2 road; go ahead downhill for 200 mts until the junction where you can see a signpost “Gera Lario / Domaso”; go under the underpass (8) which comes out left on the Muletrack (signposted “Gera Lario / Chiesa di S. Vincenzo) which goes between the houses at Folciano and back onto the SP2.
As this point go downhill on the provincial road to come back to the San Vincenzo church at Gera Lario; an alley brings you out at the front of the church to finish the route.