At the foot of the Albano Valley

At the foot of the Albano Valley 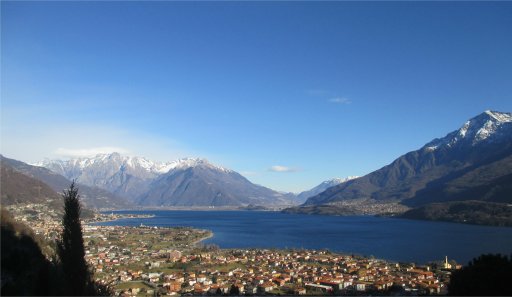 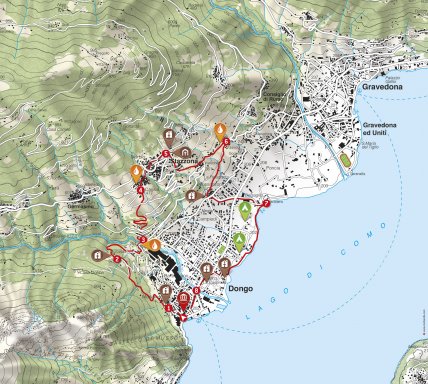 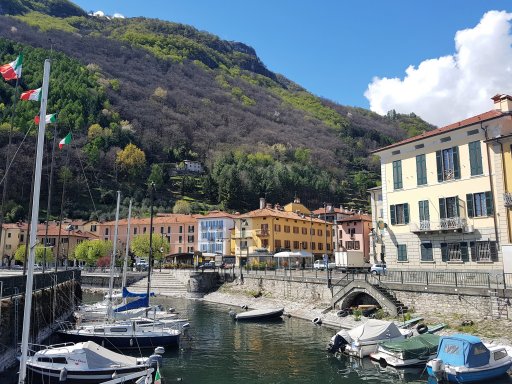 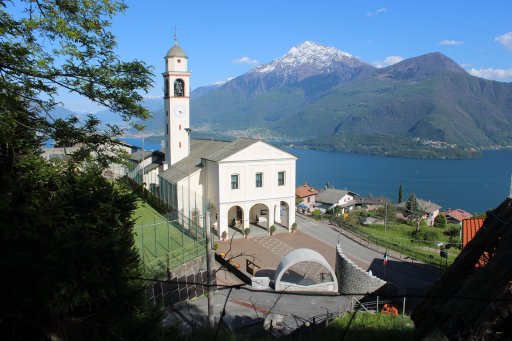 The valley created by the Albano stream goes laterally from lake Como and is a connection from Italy to Switzerland via the San Jorio pass. At the bottom of the pass there is Dongo, from the XV century they took advantage of the presence of Iron in the valley above. This walk is very interesting because of the history, traditions, villages and views.

The walk starts at Piazza Paracchini in Dongo, famous for the capture of Mussolini and the shooting of the bosses of the Repubblica Sociale Italiana in april 1945. In the Neoclassic Palazzo Manzi, municipal building, there is the “Museum about the end of the War”, that shows through use of artifacts, documents and inedited films the tragic end of the twenty years of Fascism.
Go left into via Mercato and at the underpass, go right on via 4 Novembre, then right again on via Lamberzoni. When you get to the Romanic church of S. Maria in Martinico go left (1) along the cobbled street (signposted “Chiesa S. Eufemia / Vigero / Tegano”); at the first two junctions go left, while you go right at the third cross roads, following the same signposts.
At the crossroads (signposted “Vigero / Tegano / Crocetta”) go straight on, go over the water tubes, across a stream and join at the right on the rough track. When you get to the cement track go straight on downhill (signposted “Chiesa di S. Gottardo / Barbignano”); on the next bend go left onto the asphalt road, then right again (2) towards the Baroque church of S. Gottardo situated on a panoramic hillock that you go to up a ramp of steps. The route continues on the right of the church, where you arrive at a gate that that leads onto the Muletrack; go over the stream and go right, downhill and then go straight on the asphalt road. When you get to the water tubes you go left on the cement road and when you get to house n° 2, go right on via Ponaga, up the steps that come out at via Antica Regina. Go left, go over the Ponte della Regina (bridge) and at the stop sign go left again (signpost “Strada per Garzeno”), arriving at the via Mulattiera p. Montagna (3) (signposted “Stazzona /Brenzio / Germasino-Garzeno”). Walk on the cobbles going across the village road several times and goes uphill along the side of the mountain for about 1,2 kms until you arrive at Stazzona, at the hamlet Cassia. At the junction (4) go straight on the asphalted road, at the next cross roads turn right (signposted “Stazzona Chiesa / Brenzio”) until the little piazza, where there is a washing place and a very traditional chapel. The walk goes left, at the junction after the stream left again, passing between the ancient houses of the hamlet of Morbio; from the small piazza with the washing area you go right and at the stop go left towards the church. Go past the cemetery and the townhall arriving at the S. Giuliano church (5) and at the Masun of Stazzona.
The descent leaves on the side of the church facing the lake down a cement track (signposted “S. Gregorio / Dongo / Gravedona”); at the cross roads after 30 m. go right on the cobblestones; at the junction go straight on the asphalt road and then go left onto the a Muletrack, preceeded by some cement steps.
When you get to the asphalt road go left, past a small chapel, curving immediately round to the right and then straight on the Mule track which comes out on the asphalt road another time.
Leaving the last houses behind you walk straight up some cement steps and on the downhill Muletrack that arrives at Vanzonico. When you get to the asphalt road go left, past a fountain and at the bend go left on the Muletrack (signposted “Ganda / S. Gregorio / Gravedona”).
Arriving at Ganda, just before the bend on the asphalt road (6) go right onto the cobbles of via della Motta (signposted “Dongo / Mossanzonico / Chiesa S. Lorenzo”). A long downhill section arrives at Mossanzonico; at the cross roads go left, where you arrive the fifteenth century Oratory of S. Lorenzo with precious statutes from the XVII century. works by Antonio Maria Maragliano. Go left to arrive at piazza Mossanzonico, then right on via S. Lorenzo until you arrive at the Main road SS340. At the stop sign go across the main road, going straight on in the Hamlet Bersaglio (signpost “Palestra Comunale”), where you meet the cycle walk track (7) by the side of the lake, go right to follow the track for about 1 km. Slightly after the S. Stefano church turn right on the asphalted road (signposted MTB “S. Jorio / Giovo / Bocchetta”), at the stop sign go left and when you get to the dorway of the Parrocchiale church, go right onto viale Mons. P. Bellesini, which brings you back to the main road. Bend round to the left to arrive at the Santuario della Madonna delle Lacrime, with the annexed Francescano convent (C. XVI), named after the ancient painting of the Madonna with baby which is worshipped here. Go past the Santuario, cross the main road before the bridge over the Albano river (8) and carry on down via Tre Pievi and onto via Roma to come back to Piazza Paracchini.