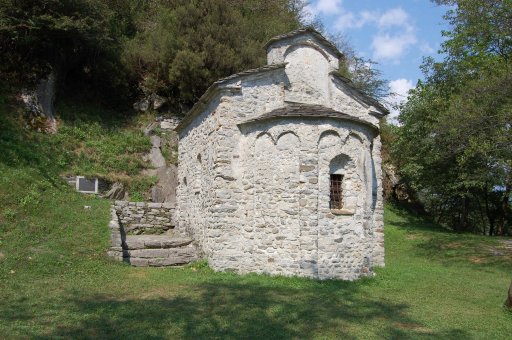 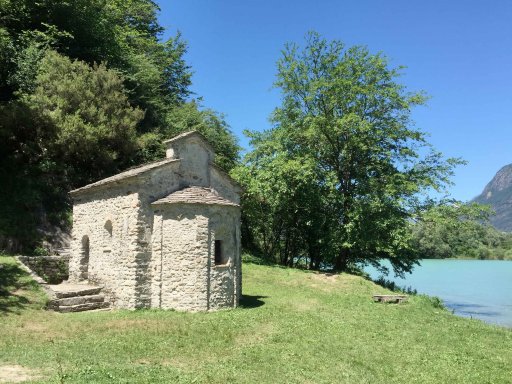 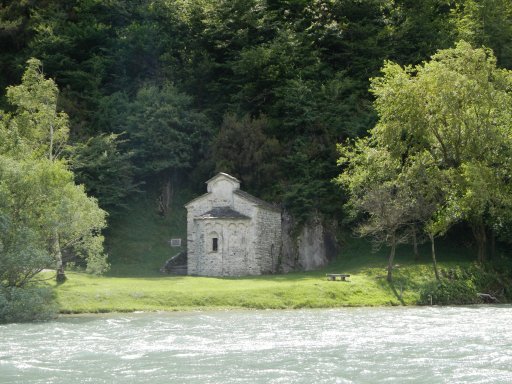 The temple of St. Fedelino rises on the spot where, according to tradition, the saint was martyred during the reign of the Roman Emperor Maximian. The site was identified by a pious woman by divine revelation; once unearthed, the relics of the martyr were brought to Como and the point where they were found was consecrated with a small temple.
The small structure that has many of the core elements of the Lombard Romanesque is a real gem in miniature, one of the most ancient in Lombardy. It was built by Comacine craftsmen and thanks to its isolated position; its structure has remained basically unchanged architecturally. The structure is almost square (about 3.5 meters on each side), and in accordance with medieval symbolism built with a semicircular apse oriented to the east (toward the rising sun) and the north directed towards the left (proclaiming the gospel). The façade is set against the mountain and the entrance is located on the side wall. The walls outside, up to 50cm thick, are in good condition and the building materials are made from river stones and stone slabs for the roof. The exterior of the apse is refined by three pairs of hanging arches, typical of Romanesque churches. The gabled roof is crowned by a pediment
Internally, the apse is semicircular and receives light from a central window, double Lancet window embrasure Unfortunately almost all the frescoes have disappeared: today there remain only some fragments. At the centre of the apse we find a Christ Pantocrator in Byzantine style (only partially readable), with a book in his left hand that bears the inscription “Ego sum via veritas et vita”, flanked by two angels with outstretched arms holding two red drapes. Below, on either side of the window, you can see a representation of the twelve apostles. These frescoes are dated between the 11th and 12th century. The cross vault appears to be the oldest constructed in the Como area. The temple of St. Fedelino, in its long history, has had its moments of decline, during which it was used for many different purposes: from a Spanish fort, a barn, tool storage for the workers who mined granite from the area (still known today as St. Fedelino granite). The structure has therefore requested two restorations, the first in 1901, the second in 1992.

Opening hours
Open from May to October: Saturdays, Sundays and bank holidays from 2pm to 4.30pm
From end October open by reservation only.