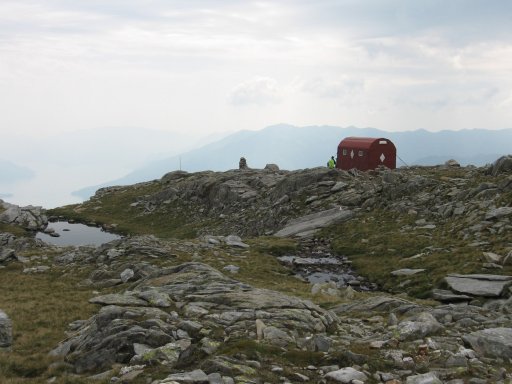 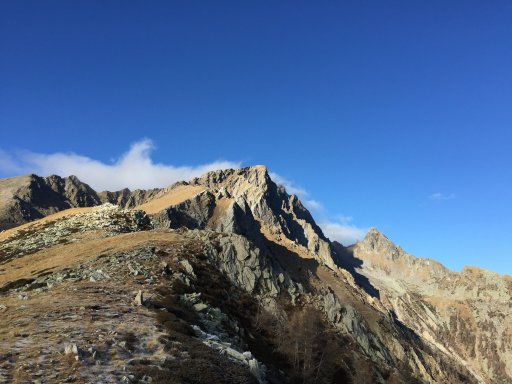 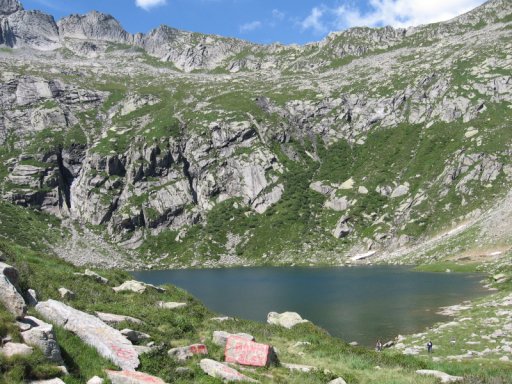 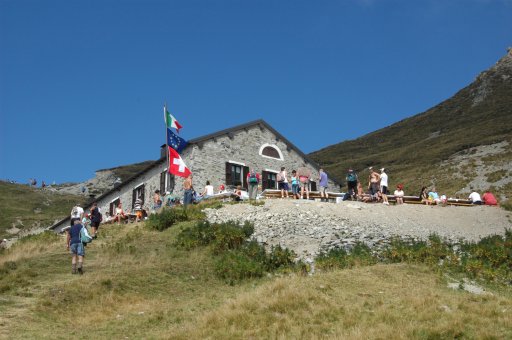 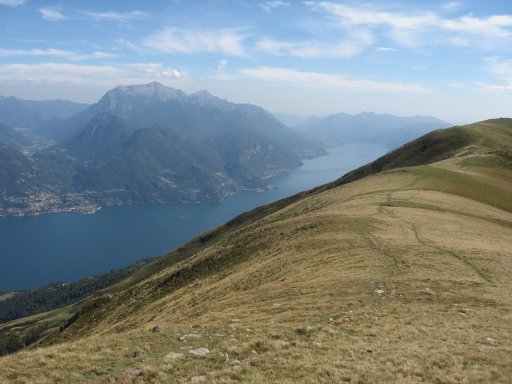 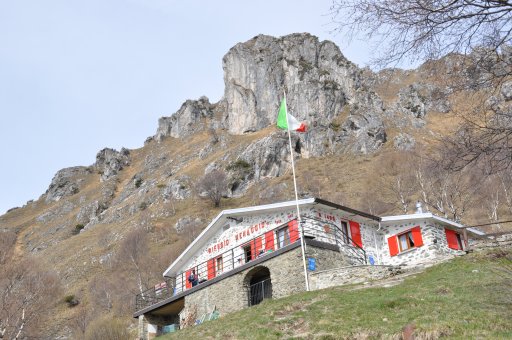 How to get there
To reach San Bartolomeo by car: take the SS340 Regina state road until you reach Gera Lario. Turn right before the first bridge over the San Vincenzo stream (for those coming from Domaso, turn left after the bridge) following the signs for Bugiallo. After about 3 km uphill, turn right at the crossroads and continue along the narrow but paved road to San Bartolomeo (12 km from Gera Lario), where the church of the same name is found, and where you can park your car.

The Alta Via del Lario is a challenging but captivating itinerary through the wild peaks of Alto Lario Occidentale (Upper Western Lake Como). This trekking route of over 50 km is divided into 3 main stages. The itinerary runs along the ridge that separates the Como side from the Swiss side, partly tracing the paths that connect the ancient alpine pastures.

First stage - San Bartolomeo-Capanna Como
Start from the path behind the Church of San Bartolomeo and follow the sign that indicates Sasso Canale and the route of the Alta Via dei Monti Lariani. Enter into the pinewood until you reach Alpe Pescedo (1560 m) and then turn left towards Alpe di Mezzo (1540 m – 50 minutes). Continue in the direction of the summit of a dry stone wall called “Terminone” and climb up to the top of Sasso Canale, the Sasso Bianco (2396 m). Continue along the fairly exposed ridge until you reach the top of Sasso Canale (2411 m – 3 hours).
From here, you go down a difficult stretch on plates and rocks before climbing back up to Passo Canale (2215 m). Continue until you reach the base of the east face of Pizzo di Ledù (2505 m), then climb and reach the beginning of the equipped section of Ledù (PD – not very difficult, second-degree steps). Walk against the wall following the wire ropes until you reach the Valle di Ledù (2418 m). From here, walk along an easy path and you will soon reach the Bivacco Petazzi and Lake Ledù (2241 m – 6 hours).
Cross the Ledù Valley in a continuous series of up and down slopes until you reach the Avertai (2206 m – 7 hours), a grassy saddle that leads to the Val d’Inghirina. After descending along a pasture and then climbing up again, you reach Lake Cavrigh (2130 m). From here, continue towards the mouth of San Pio (2183 m – 8hrs 30min). Proceed downhill in the direction of Lake Darengo; pass a stony channel and a band of ganda, and then climb a small hump until you finally reach Capanna Como (1791 m – 9 hours).

Download the details and the altitude profile of the first stage

Second Stage - Capanna Como-Rifugio S. Jorio
From the Capanna Como, head north west towards Passo dell’Orso (2152 m – 1 hour). Go down some artificial steps until you reach Val Mugiam, and then continue downhill until you arrive at the ruins of Avert Caurga (1968 m – 2 hours).
Going up and down, you reach the mighty ridge called Schena di Mogn, of the Mater de Paia (2482 m). Go around it by following the obligatory passage along a short equipped stretch (Not very difficult, second-degree steps) and then descend to the other side. Go past the Avert Muggiolo (1981 m) and continue in the direction of Passo di Ciancabella (2180 m).
Go around Monte Cardinello (2520 m), descend towards Alpe Paina (1964 m) and then walk along an easy path that will lead you to Alpe Malpensata (1880 m – 5hrs 30min).
From here, go up to the Passo di Camedo (1973 m – 5hrs 45min, a boundary stone and signpost) and enter into Swiss territory (Canton Grisons). The route continues to the left, arriving at Bocchetta di Valstorna (2036 m) before descending beneath the slopes of Monte Ganda Rossa (2213 m). Descend further down along a wooded ridge and continue to Alpe Roggio. From here, proceed until you reach the Laghetti di Roggio (1955 m 7hrs 20min), pass between the two small lakes and climb up to the Bocchetta di Stazzona (2123 m – signpost - 8 hours). After going back to the Italian side, descend towards the Avert di Possolo (1920 m – 8hrs 30min) follow the cart track that leads to Passo di S. Jorio and continue to the Rifugio S. Jorio (1950 m – 9 hours).

Download the details and the altitude profile of the second stage

Third Stage - Rifugio S. Jorio-Rifugio Menaggio
From the Rifugio S. Jorio go down to the Rifugio Giovo (1709 m - closed) and take an easy mule track that runs along the head of the Albano Valley. After arriving at the Rifugio Sommafiume (1784 m - 1hr 15min), climb up and continue in the direction of the Bocchetta di Sengio (1994 m – 2hrs 15min). Walk around the peak of Sengio (2113 m) across some easy plates and tracks until you reach a short climb with rocks that leads to Coul del Piz (2070 m – signpost). Climb over the ridge, and take the downhill path that goes around the north side and, after regaining altitude, you will reach Buco del Pizzo (2115 m). From here, go back to the south side and after a few channels you will reach the Bocchetta di Valmori (2053 m – 2hrs 55min). Go around the Cima Pianchette (2167 m) until you arrive at the Bocchetta del Pertus (2082 m). Continue past some of the bocchette (passes) such as Bocchetta Careggio, Bocchetta di Malpensata and Bocchetta di Sebol (1986 m). Walk around the hump of Monte Tabor until you reach the Bocchetta d’Ailgua (1958 m – 5hrs 20min). From here, continue on the Cavargna side towards Monte Marnotto and the Bocchetta di Rozzo (2022 m). Cross on the right until you get to the Bocchetta di Senagra and then go around the summit of Monte Bregagno, thanks also to the help of a fixed chain. Continue through the pastures until you reach the little Church of S. Amate (1617 m). Head straight until you come to a downhill path that leads to the Rifugio Menaggio (1383 m) and the end of the route (8h15).
From here, go down to Breglia (about 1hr), where you can take the bus to Menaggio (Line C13 Plesio–Menaggio) and from there, another bus to Gera Lario (Line C10 Como-Colico), both managed by ASF Bus Lines.

Download the details and the altitude profile of the third stage

Notes
The difficulty of the route is EE (Expert Hiker), so it is recommended for well-trained hikers. With the exception of the two equipped sections on the Ledù and the passage to Schena de Mogn of Mater de Paia, there are no particularly difficult sections along the route.
The path is signposted with red and white markers and stamps.
The route is divided into three stages and may be very long and demanding, therefore it can be divided into 5 smaller stages (with overnight stay at Bivacco Ledù, Capanna Como, Rifugio S. Jorio and Rifugio Menaggio).
We recommend that you equip yourself with the appropriate trekking gear and equipment and food for several days.

Warnings
Check the weather forecast before starting your hike