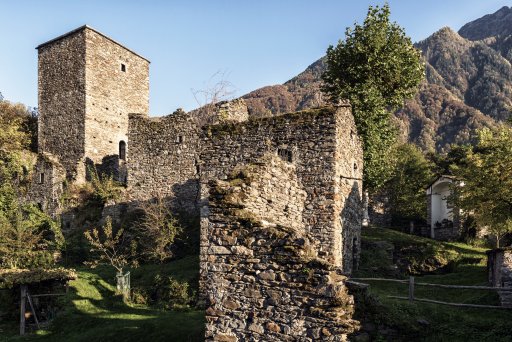 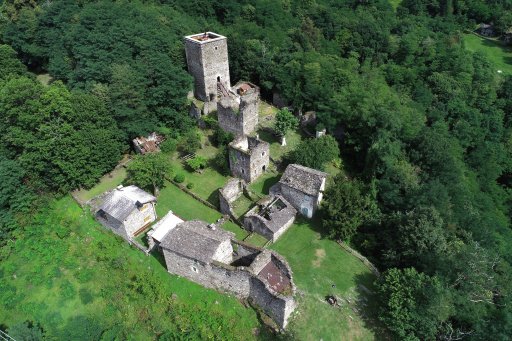 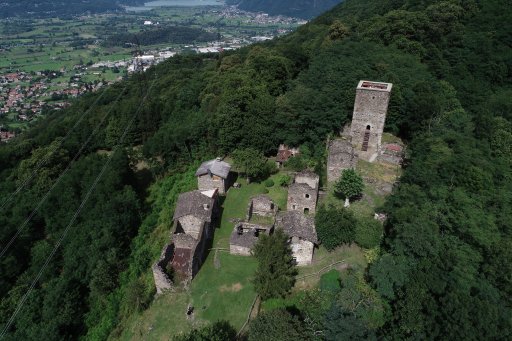 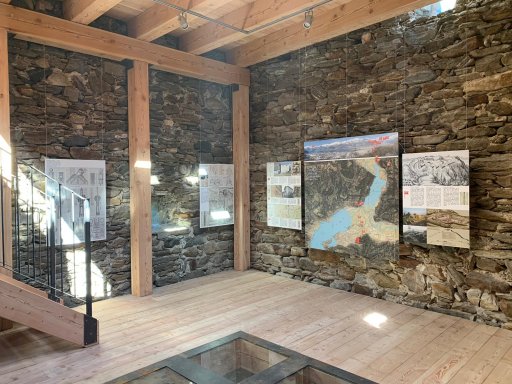 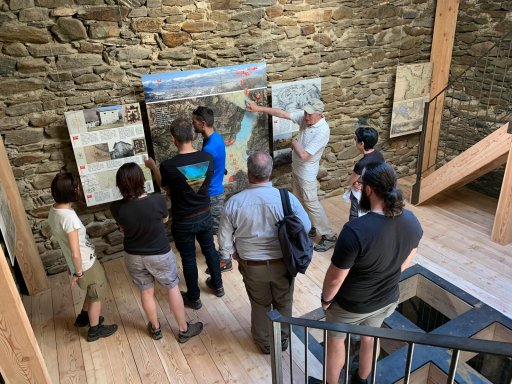 On the slopes of Mount Legnone, along the right bank of the river Inganna, on a hill about 500 meters above sea level, you’ll find the ruins of a fortified complex known as the Tower of Fontanedo. It is a small village that follows the rocky terrain of the place. The towers are constructed on two levels: the upper part of which is the tower and a lower part (towards Colico) consisting of a number of buildings in line. When studying the original fortified buildings, it is reasonable to assume that there have been several interventions. The typological analysis identifies a series of walls that define the perimeter of a fence in front of the entrance of the Tower, on the southwest side; they then followed over the centuries, additions and upgrades.
Based on the poor documentation available so far, we know that this imposing fortress was built at the behest of Bernabò Visconti in 1357, on the defensive line of the Upper lakes which also included the two towers of the North Montecchio. However, given the floor plan, architectural details and the geographic positioning it would place the origin in a previous era, around the 12th century.
The fort held responsibility for the control of the ancient road halfway to Monte Legnone, which connected the Valleys of Valvarrone and Valtellina (ancient Scalottola), and maintained its strategic importance in later centuries, when it was extended and incorporated into the defensive system of the Fort Fuentes, becoming the high access trail. The style of construction of some walls in fact confirms the dating in 17th century. The tower is surrounded by buildings and support, now abandoned and crumbling. The village also included a chapel which once contained a fresco depicting the Madonna and Child, probably dating from the 15th century. The Fresco has since been removed and is now preserved in the church of the Holy Guardian Angels in the village Curcio.
The tower has a floor size of almost seven square metres and has, for defensive reasons, only one entrance on the first floor with several slits arranged along the mighty walls. Despite having being slightly lowered during an operation of securing and consolidation made at the beginning of the 80s, its 15-meter-high tower still dominates the entire upper lake and the nearby Pian di Spagna. The plateau opposite in fact offers a vast panorama, unfortunately partly ruined by the presence of a high voltage line, which repays the effort of the short climb. The fortified town was connected to the village of Fontanedo, located a little further upstream and Colico, by several mule trails.
Today the fort forms part of a network of well-marked, maintained and easily accessible trails, including the CAI Colico circuit called Anello di Fontanedo (Ring of Fontanedo). This trail also connects the tower with the nearby Church of St. Helena located at an altitude of 600 m. At the foot of the rocky outcrop on which the village stands, in the locality Robustello, you’ll also find the ancient track now known as the Sentiero del Viandante (Path of the Wanderer), a popular route that each year attracts thousands of hikers.
The name Fontanedo derives from the areas once abundant sources of fresh water, now largely lost, that flowed down the valley and that for almost a Millennium powered hydraulic Mills in Villatico.

Opening hours
Reopening in Spring 2023
Last admission 30 minutes before closing time. Closed in case of bad weather.
The tower can be visited by appointment for organized groups any day of the year.