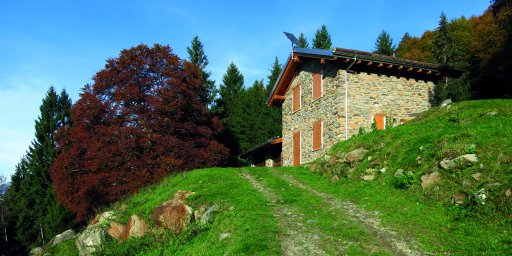 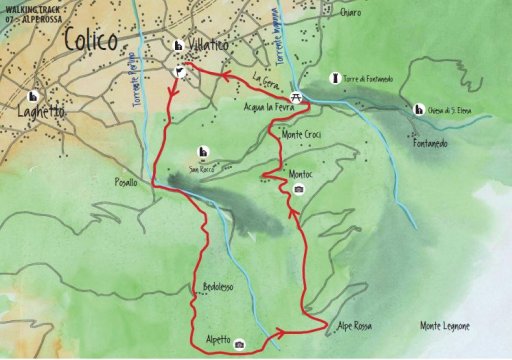 A pleasant circular walk between thick pine, chestnut and beech forests, that leads to the alpine and mountain pastures on the mountains of Colico. Bedolesso, Alpetto and Alpe Rossa- once large maintained meadows, now partly reclaimed by the forest as a result of the increasing abandonment of the pastures.

Starting from behind the Villatico church, turn right into Via Asilo, then right again in Via San Rocco. Upon arriving in a parking lot, turn right and immediately left along Via Legnoncino, following the driveway with concrete bottom (direction CAI Sentiero dei Torrenti) until you reach the weir of the Perlino creek. Cross the stream and turn left, following the CAI 10 Alpe Bedolesso / Alpetto (you are now in Posallo). With a second weir on the river behind you, turn right leaving the roadway to follow the path towards Bedolesso (marked + wooden sign) that winds through the woods for about 2 km until you reach a clearing, where you’ll find a signpost pointing left towards a path through the grass that leads quickly to Bedolesso (798 m). Walking between the huts to follow the path CAI 4 Alpetto / Refugio Lorla / Alpe Rossa. The path overlooks a stream, and rises rapidly until it reaches the chalets dell’Alpetto (1155 m). At the trail sign pole continue left on the trail CAI 5 Alpe Rossa / Alpe Temnasco / Montoc. The track now runs on a slight slope overcoming several streams until you come to Alpe Rossa (1122 m). A little higher up on the right is a hut made recently by the Council of Colico in service of the Alps. Note the impressive beech tree near the hut, ranked among the monumental plants of the Province of Lecco. The direction to follow from here is CAI 1/A Montoc / Acqua la Fevra / Colico, then turn left downhill passing a fountain, then through the beech forest with a steep descent. Shortly after you come the a road dirt, continue the marked trail. After about 600 meters you’ll arrive at a clearing with chalets of Montoc (940 m), then turn left back into the woods. The trail follows a bend in the road and then continues to the left. At the junction turn right (signposted Monte Croci / Acqua la Fevra / Colico) up to a trellis to pass again to the right to reach the farms. The road is now wider, becoming a paved road: keep to the right, then left on the path that leads to Monte Croci (535 m). Precede left onto a small concrete and dirt road that joins, right downhill to the paved road. Shortly you’ll arrive at Acqua la Fevra: turn left on the asphalt road, Following for a long descent back to Villatico. At the stop sign next to bar La Colomba turn left, and immediately right into Vicolo Mulino to return the square of Villatico.